How do you measure America’s greatness?

By the size of its economy, or the strength of its military?

By the height of its city skylines, or the audacity of the moon landings?

Maybe. But America’s greatness is not always measured like in the movies or a campaign speech. Sometimes, an anonymous act of gratitude is proof enough, even if we, as Americans, don’t always see it that way. 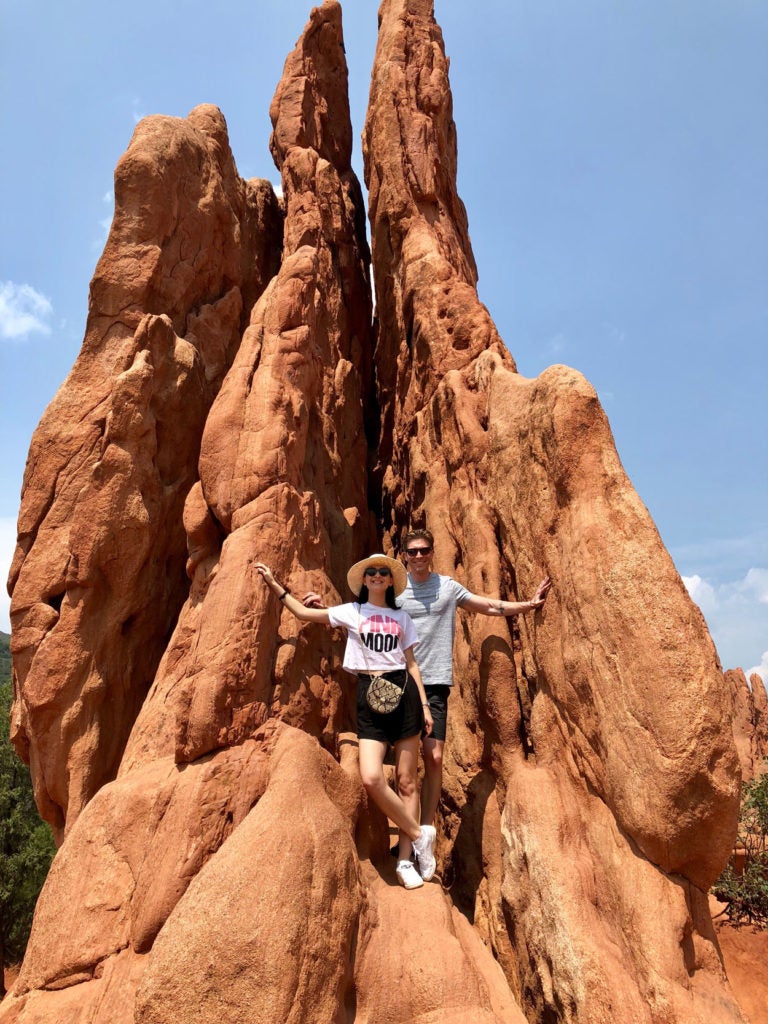 In August, my wife, Lilya, and I were at dinner in Geyserville, California, with my younger brother, Drew, and his girlfriend, Gabrielle.

We’d been wine tasting all afternoon and had rounded off the day with a few cocktails to boot. Feeling a bit loosened up, my brother and I, as is our habit, slipped into a familiar topic of conversation—the war in Afghanistan.

You see, both Drew and I are U.S. military veterans. And, naturally, we get to talking about our wartime experiences whenever we’re together. Often a bit too loudly, as Lilya and Gabrielle gently suggested on that night in Geyserville.

“They asked me to tell you, ‘Thank you for your service,’” she said.

My brother and I were speechless. It is, after all, all too easy to assume the country has moved on and forgotten about our wars when so many of the things that divide us seem to occupy so much of the news.

On the walk back to the hotel that night, my wife, who is Ukrainian, told me, “I’m so shocked and impressed. I’ve never seen such a kind gesture by a stranger. It was magnificent.”

I was moved by the gesture, too. But it wasn’t the first time someone in America had bought me a drink for being a veteran. What I didn’t immediately understand is that from my wife’s point of view, it was a singularly unprecedented, characteristically American, display of gratitude.

A week later, Lilya and I were having a drink at a bar in my hometown of Sarasota, Florida. We chatted with the barman and it came up that I was a former Air Force pilot and a war correspondent.

When it was time to square up the tab, the barman said with a smile that he wouldn’t take my money.

“Thank you for your service,” he simply explained.

On our way out the door, my wife stopped, took my hand, turned to me, and said, “This is the greatest country in the world.”

In the summer of 2014, I left for Ukraine to report on the war, thinking I’d be gone for only two weeks. More than four years later, the war isn’t over and I still live in Ukraine. Most importantly, I’m now married to Lilya.

In August, Lilya and I traveled across the United States on our honeymoon. It was her first trip to America. For my part, I’d spent only a handful of weeks in the U.S. since I first left for Ukraine in 2014. So, this trip was a homecoming of sorts for me, as well as a chance to take stock of how much America had changed in the years I’ve been away.

You, dear reader, surely understand all the challenges facing our country. You’re likely bombarded with reminders of these challenges each time you go online or turn on your TV.

Yet, I want to share with you a perspective of your country that might be as foreign to you as the conflicts on which I’ve reported. It’s the perspective of my wife—a 22-year-old Ukrainian woman who was born in the shadow of the Soviet Union and spent most of her young life amid the backdrop of revolutions and war.

Despite all the broken dreams in her country, Lilya, like so many Ukrainians of her generation, possesses a clear vision of the life she wants and deserves. And you, dear reader, are already living it.

When the jet broke through the clouds and out the window we saw the lights of the New York City skyline, Lilya smiled and said, “This is the dream of all my life.”

We started in New York City. Despite my best efforts not to, I wept at ground zero, remembering things from my youth I don’t often revisit. Like watching on TV as the towers fell during a morning class at the Air Force Academy. I was only 19, but I understood what that day meant for my future.

We marveled at the skyscrapers in New York and Chicago, and we visited all of Washington, D.C.’s monuments. Later, under the shadow of the Rocky Mountains in Colorado, we visited the Air Force Academy, my alma mater.

I won’t lie, I burst with pride to show Lilya that place.

We walked across the terrazzo—the academy’s massive central courtyard—and Lilya shook her head in disbelief at the spectacle of the freshmen (known as doolies) who ran along the marble strips, dutifully stopping to recite volumes of memorized knowledge at the upper class cadets’ behests.

At the academy’s War Memorial—a black stone monument to graduates who fell in battle—I took a quiet moment alone and ran my fingers across the freshly engraved names of remembered faces.

During our visit, I was honored with the opportunity to speak to a couple of classes, as well as with the faculty, to share my wartime experiences. During one classroom session, the professor put Lilya on the spot and asked for her impression of America.

Impromptu public speaking in a foreign language isn’t easy. But she nailed it.

Without missing a beat, Lilya replied: “This is the greatest country in the world. But most Americans don’t know it.”

From Colorado we flew to Phoenix and drove across the desert to the Grand Canyon and then on to Las Vegas. In California, we visited Hollywood, drove over the Golden Gate Bridge, hiked in the redwood forests, and enjoyed wine country to its fullest. We doubled back across the country to Florida and toured the Kennedy Space Center, where we saw the Space Shuttle Atlantis and a Saturn V moon rocket.

In the end, we traveled from sea to shining sea and concluded our journey in Sarasota, where Lilya met my 93-year-old grandmother, Joan, for the first time.

As they held hands and chatted, I felt an overwhelming sense of gratitude that we were able to find a way to America while there was still time. And while more than 70 years separated their lives, I also observed a special bond between my wife and grandmother.

They both possess a unique appreciation for life’s little pleasures. And for good reason. My grandmother has lived through the Great Depression, wars, and societal upheavals. For her part, my young wife has already lived through two revolutions and a war.

Of course, you don’t have to endure such historic challenges to appreciate life’s blessings. But, I must say, it’s all too easy to misjudge the gravity of life’s problems when you’re used to peace and prosperity—after all, there’s no microaggression, no trigger, no slur or verbal insult that could ever compare with the impartial brutalities of revolution and war.

The truth is, every American, each and every one of us, is privileged. We’re privileged because we are American.

If you don’t think so then lift your eyes to the horizon, over which exists a world where the overwhelming majority of humanity does not enjoy the self-evident entitlements we so flippantly take for granted—things like life, liberty, and the pursuit of happiness.

The more cynical among us will likely roll their eyes at the preceding sentence, writing it off as overwrought jingoism. But when hardship and war comprise your daily reality, you don’t take America’s greatness lightly, or for granted.

Whether we want it or not, we Americans have inherited an awesome responsibility. We are the caretakers of the promise of democracy for people around the world who yearn for it.

Of course, we’re not the only democracy in the world. But I’ve seen firsthand how the ideal of American democracy stands alone in the eyes of Ukraine’s soldiers, the Kurds in Iraq, or even octogenarian Tibetan freedom fighters. For them, America symbolizes a dream worth fighting for.

I was proudest of my homeland when I showed it to my wife for the first time and saw her eyes illuminate in witness of a dream foretold. I also silently hoped that America wouldn’t let her down.

Yes, we may fail in our time to realize the promise of our founding for every American.

Yet, despite the long shadow of our past sins and the gravity of our contemporary shortcomings, we haven’t quit yet and better make sure we never do.

Because the world is always watching us. Always. And there are plenty of dark forces in this world held at bay by the simple fact that America is still a dream worth fighting for.

Yes, we aren’t perfect. But if not us then who?

The front lines against tyranny aren’t always found on the battlefields against goose-stepping armies. Sometimes, that battle is won at the dinner table, in a classroom, in a random encounter on the sidewalk, or even in a Facebook post.

Sometimes, victory is measured by the courage to show decency and respect and to find common purpose with someone with whom you share nothing in common except for being American.

After everything I’ve seen, I still believe that if the better angels of our nature win in America, then they will win everywhere. The world is watching us, remember.

So, how do you measure America’s greatness?

My wife saw our moon rockets and our skyscrapers and our monuments and our natural wonders. Yet, in the end, what impressed her most were those unnecessary and unsolicited acts of thanksgiving for my military service by total strangers.

“I never thought that random people would be so kind to strangers just because they respect them,” Lilya told me. “America really is the greatest country on earth.”

She paused for a beat and then added, “This trip changed the way I see everything, and I’ll never be the same.”

6 thoughts on “Combat Vet Brings His Ukrainian Wife to the U.S. for the First Time, Here’s Her First Impressions…”