I’m a tad confused; I thought Americans were ignorant, biased, and really had nothing to fear from allowing mental defects to use whatever restroom they desire to use at that moment??? 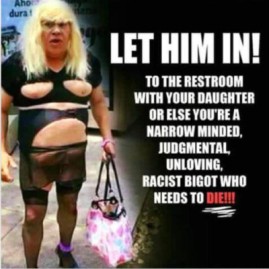 But when elected officials have to face exactly what they foisted on the rest of us, they don’t like it very much.

Those that consider themselves the ruling class should have firearms, automobiles, freedom, property, etc. and apparently they also think they should be able to visit the restroom in safety and peace…

You and your children, not so much!

A Democratic state senator in Colorado, who is a man, “frequently” enters the women’s bathroom, contradicting his claim that he only accidentally used the ladies room once.

A recording between the state senate secretary and the Colorado State Patrol, obtained through a records request by the conservative nonprofit Compass Colorado, revealed Sen. Daniel Kagan’s visits made his female colleagues uncomfortable.

“I confronted him in the bathroom itself and said, ‘What are you doing in here?'” Martinez Humenik told KUNC, a public radio station. “Then, as we were walking out, I said, ‘It’s not OK for you to be here. I don’t want to see you here again.'” 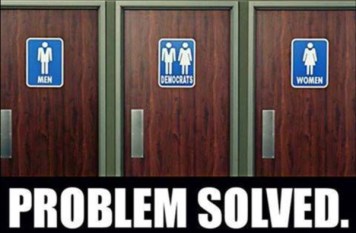 Two other female staffers had “similar experiences,” according to Martinez Humenik. Another legislator, Sen. Owen Hill, said he saw Kagan in the women’s bathroom when he was taking his two young daughters to the facilities last year.

“My girls still come up here,” Hill said. “I will no longer let my girls use this bathroom because of this experience.”

Kagan denied using the ladies’ restroom more than once and said it was “beneath the dignity” of the state senate for trying to “make something of nothing.”

“I accidentally used the wrong one,” Kagan said. “It was embarrassing, and it’s the kind of embarrassing mistake you don’t make twice.”

A recorded phone conversation between the secretary of the state senate and security obtained by Compass Colorado reveals a different story.

“So here’s the problem I’m having and you can maybe help me figure out the best way to do this,” Effie Ameen, the nonpartisan state senate secretary told Heather White, the communication supervisor for the Colorado State Patrol in February.

“And, again, I don’t, I don’t know if this will prevent anything,” Ameen said. “But, we have a person who works here, a male, that has been frequently accessing the bathroom.”

Ameen asks White if they can change the code to the women’s bathroom to prevent Kagan from using the bathroom again.

“And so that’s why I wanted to change the code, because I know the code we have on there is sort of our generic one that we use like for everything so it’s not shocking that people would know it.”

Compass Colorado also released an email from White, which detailed her conversation with Ameen and their attempts to eliminate Kagan’s access to the women’s bathroom, which could be entered by using a senate key card.

“I also removed the Senate Restroom door (#260) from the door group ‘Senate Offices and Restrooms Only,'” White said. “Effie [Ameen] advised this is a women’s restroom and Sen. Daniel Kagan has continued to use it even though he’s been advised this practice needs to stop.”

White added that she has since eliminated Kagan’s access to the women’s senate restroom, and Compass Colorado confirmed his access to the bathroom has been restricted.

“We confirmed with the Colorado State Patrol that Kagan was the only member that has had his access to the bathroom revoked,” said Kelly Maher, executive director of Compass Colorado.

“The fact that Colorado State Patrol had to create a specific keycard category and change the door code to the bathroom because of Sen. Kagan certainly refutes his recollection that this was a one-time, embarrassing incident,” she said.

Kagan’s bathroom scandal surfaced after he gave a controversial speech at the state capitol in March denouncing sexual harassment, where he used explicit sexual terms.

“Members, we as a body must ensure that the senate provides safety to all who seek to transact business here, and as the rule makes clear, have the right to raise questions about the dignity and integrity of our proceedings,” Kagan said. “Acts of sexual harassment by any of our members, if proven by diligent investigation to have, more likely than not, occurred are extraordinarily serious matters.”

Kagan went on to describe sexual assault in detail on the capitol floor, offending many members.

“Any butt slaps or nips to the bottom are permissible if they’re a power play,” Kagan said. “Just so long as the butt slapper can’t be proved beyond a reasonable doubt to have gotten sexual thrills from it. That cannot be our standard.”

Kagan explained to members that felony sexual assault is “knowingly and willingly, without consent, sexually penetrate someone.”

Republican senators said Kagan’s speech was “repulsive,” “despicable,” and odd, given his reputation for using the women’s bathroom.

“When Sen. Kagan is up there slobbering at the microphone about his details on this or that—it was just too much,” said Sen. Hill. “The hypocrisy of this guy who has been known—I mean I know it’s been known. This is a guy who … multiple times has been found in the women’s restroom.”

“What happened at the mic on Friday was despicable,” said Senate president Kevin Grantham. “I had people coming to me Friday telling me—these are not people that are snowflakes or prudes or anything like that—these are people that come to me and were visibly shaken, emotionally upset over what they heard.”

“And coming from this individual, that is known, known to frequent, habitually … the women’s restroom,” Grantham added.