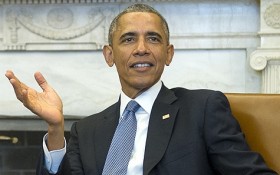 As President Obama left the White House, the mainstream press was falling over itself proclaiming how popular he was.

“Obama leaving office on a very high note,” was a typical headline.

Yet despite the media’s fixation with polls, the press completely buried one of the more newsworthy poll findings — a Gallup report that came out last Friday, which took a final look at the President Obama’s popularity over his eight years in office.

That poll found that Obama’s overall average approval rating was a dismal 47.9%.